Hotel Television with a well-chosen list of TV channels and good broadcast quality creates a positive impression of the hotel, and also gives owners the opportunity to earn by offering customers to watch paid packages of TV channels.

Paid packages of hotel television are formed using the address coding system. To connect to the selected package of TV channels, the client should inform the hotel staff about his choice. Connection to new packages can be carried out by personnel with the help of a convenient and intuitive interface. Special training is not required to use this system. The billing system automatically takes into account the cost of the service in the customer’s account.

The client can also independently connect to paid packages of TV channels. For this you need to install систему интерактивного гостиничного телевидения.

Regarding the technology of building a hotel television system, the most effective and economically feasible system is a television with a combined receiving system (reception of terrestrial and satellite channels) based on the headend. This scheme has won the greatest popularity among hotel owners, as it allows you to independently change the configuration of the system (the number and list of TV channels).

The configuration of the satellite part of the system directly depends on the number of satellites and channels received, the presence or absence of coded channels and the method of distributing the satellite signal in the list. In some cases, the cost of organizing the reception of 1 selected channel can be equal to the cost of receiving 10 channels. Therefore, it is very important, even at the design stage to choose the right channel list, otherwise it can lead to a significant increase in the cost of the television system as a whole. 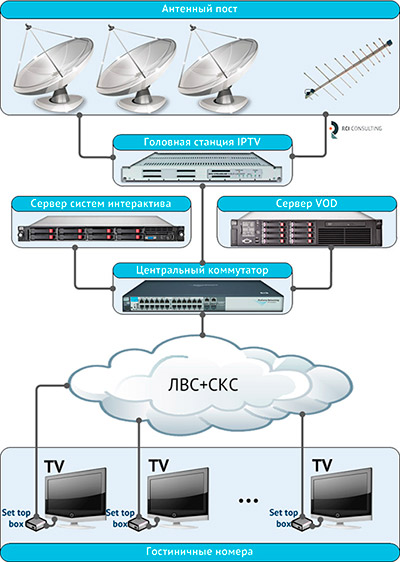 Head station television converts signals coming from the antenna port, and is usually located in the server room of the hotel. In the future, the signals are broadcast to television distribution networks on the hotel TVs to the end users.

One of the advantages of this scheme is the insignificant cost of adding a new subscriber to the network.

In the event that the hotel already has a structured cabling system (SCS) built, it is used as a distribution network for television, and as the Head Station, use the IP Headquarters.

Hotel television systems are designed for round-the-clock operation in various conditions, therefore one of the main requirements when selecting equipment is reliability and fault tolerance. As for the supplier of equipment for headends, WISI (Germany) remains the undisputed leader in this field for many years.

Subscriber points are equipped with hotel TVs with STB (Set-Top-Box) in case of IP signals, or with DVB-C receivers (tuners) with a digital TV signal.

The main advantages of the proposed scheme for building a TV system:

News on the topic

Economy of energy in the hotel. Energy-saving solution from INNCOM